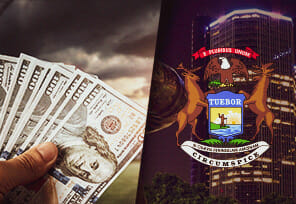 Amazing things have been happening in Michigan lately! Don’t worry, it’s not about paranormal activity, but breaking records!

Namely, a number of incredible achievements have taken place in this country when it comes to sports betting. During the month of November 2021, the state has set new records regarding online sports betting as well as gross wagering receipts.

Users have invested a lot of money in their favorite form of online entertainment, sports: as much as $437.8m. The previous record set in October was $463.3m, which is 2.3% less than in November this year.

A new record has been set when we talk about gross monthly sports wagering revenue as well, more precisely $54.1m. In percentage terms, the new record is 67.7% higher than the previous one set in March, which was $32.3m.

In November, gross income related to iGaming was $107.6m. Unfortunately, this is not a new record because in October 2021 it was $109.7m which is only 1.9% more than gross receipts in November.

When we add it all up (online casino gaming and sports betting gross receipts) we will get the amount of $161.7m, which is even 20.7% more than the calculated amount at the end of the previous month.

If we take into account the deductions for the monetary value of free bets given and bet by players, the total adjusted gross income would be $130.8m, which is as much as 23.6% more than in October.

Adjusted gross for online sports wagering is $34.5m and for online casinos $96.3m.

Total revenue since the beginning of the year

In Michigan, online sports betting and casino gaming became legal for the first time on January 22 this year. From that date until now, in this state adjusted gross sports wagering income totally $99.7m, and online casino $893.8m.

The state of Michigan collected $21.4m in online taxes, of which $19.8m was from iGaming and $1.6m from sports betting.

Events in This State Since January

Since gambling and betting have been legalized in this state, many providers have launched their products on this market. The first among them was NetEnt, which did its job thanks to a partnership with multiple gaming brands. After him, Lightning Box distributed his portfolio via SG Digital to Michigan. In addition to them, the content of Playtech, FireKeepers and many others was available to punters from this state.

Meanwhile, Intelitics has also guaranteed a license to operate in the country.

However, punters from this state were not careful enough in choosing the sites through which they want to engage in this form of entertainment, so a large number of complaints knocked on the door of the MGCB (Michigan Gaming Control Board)