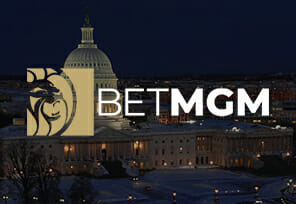 BetMGM, one of the leading gaming operators in the US, proudly announces that the company has finally opened its first retail sportsbook in Washington State!

The partnership between this operator and Emerald Queen Casino (EQC) contributed to the opening of this retail sportsbook.

All this was preceded by a deal concluded in October, after which the bookmaker was officially presented this week.

Famous athletes Edgar Martinez, Marshawn Lynch, lawyer Milloy, and Sydney Ric were honored to be the first to invest their money in bets.

“We’re thrilled to expand BetMGM’s presence in Washington, a significant market filled with some of the country’s most passionate sports fans,” said BetMGM CEO Adam Greenblatt. “Together with the Puyallup Tribe of Indians and our partners at Emerald Queen Casino, we’re proud to welcome guests to the state’s premier sportsbook.”

What Can We Expect?

In this bookmaker, players will surely notice 500 square foot videos as well as about a dozen televisions, but also 70 leather armchairs, six ticket windows, and 30 betting kiosks.

A representative of the company, Puyallup Tribal Council, the Tribe’s governing body says that EQC has achieved great success by making BetMGM Sportsbook @ EQC the main headmost destination for sports betting in the Northwest. He added that this bookmaker has the biggest video screen in the state, live broadcast, and a live game, but he also pointed out the presence of sports legends who attended the opening.

Emerald Queen Casino owns two casinos and hotels – EQC Fife and recently constructed EQC Tacoma. At both locations, users who opt for the casino of this brand will be able to use betting kiosks and in-game wagering. On the other hand, the punters will be able to use mobile in-game wagering at the beginning of next year. The kiosk for betting at EQC Fife will start on 27 December.

It should be noted that in Washington sports betting on tribal land is regulated by the state, and it became legal in March 2020. In the third month, Governor Inslee put his signature on the law related to sports betting.

A Brief Summary of BetMGM’s Work

The BetMGM brand was created as a result of a collaboration between MSM Resorts International and Entain 2018. The company is headquartered in Jersey City, New Jersey, and so far the company’s team consists of between 200 and 500 employees. Earlier this year, BetMGM launched the Borgata Casino Mobile App in Pennsylvania.

Also, recently this brand has provided its products at Emerald Queens Casino’s two properties thanks to a partnership with the Puyallup Tribe of Indians.