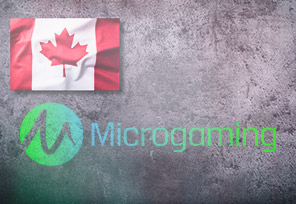 Microgaming, one of the leading developers of innovative online slots, announced that it has expanded its global reach by entering the newly regulated Ontario market.

This market was launched on April 4th, and several brands have entered the race to guarantee their presence in this Canadian province.

As announced, the developer will launch its wide range of casino products in this market, which will further improve the developer’s position in the iGaming industry.

To mark this important milestone and attract even more attention from Ontario players, this famous brand has launched its progressive jackpot release, Maple Moolah, in this Canadian province.

This fantastic online release offers players from Canada an unforgettable adventure with its progressive jackpot that can bring fortune! In addition to innovative features such as 4 different jackpots, plenty of multipliers, bonus spins, and special symbols including the Wild and scatter, players will enjoy the beautiful design and unforgettable iGaming experience.

This fantastic five-reel, 25 payline online title features a winning potential of x1,920 the stake and RTP of 88.12%.

James Buchanan, Head of Games at Microgaming, could not hide his excitement when he spoke about entering Ontario:”Now the Ontario market has opened, we’re thrilled to reveal the industry’s newest jackpot, Maple Moolah, which has all the makings of a market-leader. With its entire prize pool ring-fenced for players in the province, we can’t wait to see the first Maple Moolah millionaire made!”

Although Microgaming has recently taken several key steps that will significantly improve the company’s future, we can say that entering Ontario is an equally important milestone. Given the number of brands rushing to become leaders in this market, Microgaming’s early entry into this Canadian province is of great importance to the developer’s position in this region.

In addition to several online casino products that will be available to players in Ontario, the launch of Maple Moolah takes things a step further, allowing Microgaming to be slightly ahead of its competition.

As announced, in addition to Microgaming-owned online casino titles, punters from this beautiful province will have access to a wide library of titles from developer partners in the future.

Although we believe that everyone is as impatient as we are, we must wait a little longer and enjoy the currently available online slots!

The post Microgaming Goes Live in Ontario with Plenty of Online Releases Including Maple Moolah first appeared on RealMoneyAction.com.