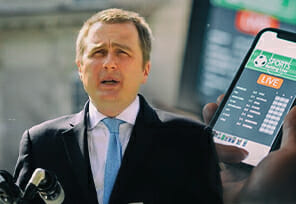 The Minister of State for Law Reform, Youth Justice and Immigration, James Browne TD, has just unveiled the General Scheme of the Gambling Regulation Bill.

The Program for Government shows a clear commitment to form a gambling regulator dedicated to overall safety and well-being, covering online gambling and in person. It will also cover advertising, gambling, and casino sites, and apps. The Scheme was already approved by Government this week.

The new Scheme is based on the recommendations of expert reports involving the Inter-Departmental Working Group Report (from March 2019), detailed analysis of the regulatory terms in different jurisdictions, and the nature of the state gambling. It also follows the increasing influence of technology on gambling and focuses on the spread of gambling related advertising.

The Authority will address the following goals:

“The publication of the General Scheme is an important milestone towards the effective regulation of gambling in Ireland under the new, independent statutory body – the Gambling Regulatory Authority of Ireland. The Scheme sets out the framework and legislative basis for how we will do this”

According to his words, they all accept that the existing legislative framework is fragmented, obsolete and lacks a coherent licensing and regulatory approach, and needs reform. It’s time to address this problem comprehensively, once and for all. He believes that the legislative underpinning of the new Authority will be vital to its success, and he is committed to taking this forward. There will be chances for stakeholder engagement and inclusion as part of the pre-legislative scrutiny procedure.

What Else Was Mentioned?

Commenting on the enforcement powers of the new Irish Authority, Minister Browne says the Authority will have essential enforcement powers for licensing. It will also be able to undertake appropriate action where suppliers are failing to comply with the legislation.