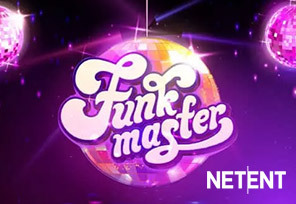 mechanic and enhanced with a host of bonus features. Free spins, Dancing Wilds, multipliers – get ready to hit the 8×8 floor, show your best moves, and celebrate the return of the boogie with fantastic wins!

It’s been quite a while since NetEnt’s launch of Knight Rider based on the popular NBCUniversal TV series at the end of February. To the delight of players, May delivers another ripper of an online slot called Funk Master – a glittering extravaganza of shiny disco balls able to generate whopping prizes with the help of the Avalanche

“What a fantastic slot theme! Funk Master brings the ‘70s dance fever back to life with a vengeance. Players will love the Dancing Wilds and the flashing disco balls. The team has worked really hard in bringing the groove to this slot and players are going to thoroughly enjoy this foot-tapping experience.”

Indeed, this casino slot is worth playing for the theme itself, however, striking visuals and groovy music are far from being the only attractions. The real spotlight of Funk Master is an impressive set of bonus features that go beyond traditional wild substitution and free spins.

Being in charge of delivering epic wins, Dancing Wilds can be considered the true highlight of this game. These symbols can appear anywhere on the 8×8 grid both in the base mode and during free spins.

Each time they are part of a winning cluster, Dancing Wilds do not disappear from the screen, but graciously boogie into an empty position (horizontally, vertically, or diagonally adjacent) and trigger the Avalanche feature. The latter is well-familiar to players, being part of Cash Noire and other popular titles from NetEnt.

In the main game, a 2×2 Dancing Hot Spot is randomly placed on the grid at the start of each spin. The positions within the area remain locked until they become part of a win. Unlocked positions award Dancing Wilds for the duration of the next round.

Things get even better during free spins with the enlarged 3×3 Dancing Wild Hotspot awarding 2 Dancing Wild symbols (instead of 1 in the base game) and expanding the reels one row up!

To dance their way into free spins, players need to land at least three Dancing Wilds on an expanded 9×8 starting grid. Six rounds on the house will start after the Avalanche feature is played. Dancing Wilds will keep their positions until they are part of a winning cluster.

Special multiplier symbols of 2x, 3x, 5x, and 10x can appear in the base game and during the free spins feature. The cool thing is if two or more of them show up on the same spin, the total win for the round will be multiplied by the sum of their values!

The post NetEnt Brings Disco Fever Back to Life In Its Latest Funk Master Slot first appeared on RealMoneyAction.com.