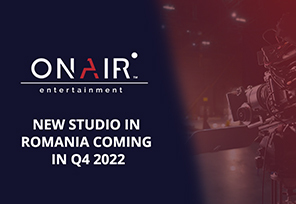 After expanding its business roots further across Sweden, On Air Entertainment, a well-known casino software developer known for its live casino content is making another significant move.

This popular brand has announced that it has finally got a thumbs up to start building its new brand-new studio.

Innovative Studio with Lots of Tables!

According to the developer, this outstanding and modern studio will be located in the capital of Romania, Bucharest.

It will feature as many as 30 tables including several for blackjack and a couple for roulette.

Players who decide to visit this studio, in addition to an amazing and unforgettable iGaming experience, will have the opportunity to feel like they are in a real land-based casino. Why? Each of the tables will be located against stunning backdrops that have been developed to improve the atmosphere of real casinos.

This studio will employ about 350 people including managers, technicians, and dealers.

The dealers that punters will have a chance to meet are highly professional and high-level trained to deliver an outstanding experience to their clients. They will speak fluent Romanian or Italian.

The studio will be intended for operators holding licenses in these two markets.

The company also plans to add two more new ones during Q4 2022 and Q1 next year after the successful launch of the studio.

Mathijs Beugelink, Head of Operations at On Air Entertainment, said: “OnAir has quickly emerged as a leading live casino provider and network, and opening a studio in Romania forms part of wider plans to continue to grow at pace. This really will be a state-of-the-art studio that will allow us to create and broadcast the most entertaining and engaging live dealer content right from the heart of Bucharest. We are also thrilled to be bringing jobs and employment to the country as we look to build out a team of 350 people to run the studio and deliver the unrivalled player experience that we have built our reputation on.”

Dejan Loncar, Head of Business Development at On Air Entertainment, added:“The Romanian and Italian markets are incredibly exciting for operators as both offer significant untapped potential. There is certainly an appetite among players to access live casino games and that is the driving force behind the opening of this studio in Romania with game hosts that are native to the country and to Italy in order to provide truly localized content for both markets.”