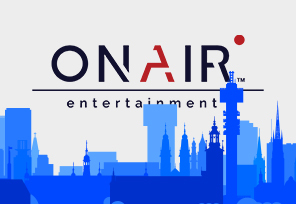 OnAir Entertainment, one of the most recognizable developers in the iGaming industry, delighted punters from the UK earlier this year. Namely, the brand expanded its business roots in this market after making a deal with the well-known Betway and 32Red.

However, this fast-growing provider has brought good news from Sweden this time! OnAir has announced its debut in this market where it will launch its fantastic portfolio.

From now on, players in this country will have the opportunity to face plenty of interesting, engaging, and thrilling live casino games.

This expansion came after OnAir Entertainment secured all the necessary approvals that paved the way for it to launch its wide portfolio on operator platforms in Sweden.

Some of the fantastic titles that players from Sweden will have the opportunity to explore include mega-popular hits such as blackjack, roulette, as well as speed roulette.

However, that’s not all; the company announced that after these fantastic games, it will launch 9 Pots of GoldTM StreamIconTM in Sweden in the coming months.

OnAir Entertainment is currently present in several regulated markets such as Isle of Man, the UK, Greece, Ontario, Latvia, and Malta but …

…has announced that it will soon step into the eighth and ninth markets after going live in Denmark and the Netherlands.

Dejan Loncar, Commercial Partner at OnAir Entertainment, said: “Entering the Swedish market is a milestone moment for OnAir Entertainment and means that operators living in the country can now access premium live casino content that is proven to thrill and entertain players. Sweden is a thriving market with plenty of potential to unlock and especially in the live casino vertical. We are now in a position to be able to help our operator partners enhance their live dealer offering, deliver more value to their players and stand out from their rivals. That we have gone live with some of the biggest brands in Sweden is a testament to the quality of our live casino games and we look forward to entertaining players with our growing suite of titles.”

OnAir Entertainment is a company that was established in 2020. The brand is headquartered in Malta, and the provider is focused on its global expansion strategy as well as developing premium content.

The company recently delighted its customers with the new Standard Roulette release, and we believe that many more amazing products await us in the future.