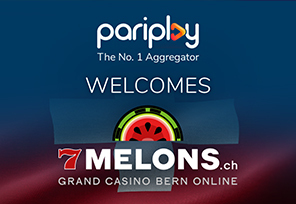 Pariplay, one of the most famous aggregators in the iGaming industry, recently guaranteed another approval that allowed the company to enter a fast-growing market, the Canadian province of Ontario.

After successfully entering this market, Pariplay turned to conquer another key one in Europe. Namely, this popular content provider announced that the company shook hands with the well-known Grand Casino Bern’s online casino brand 7 Melons and thus once again strengthened its position in Switzerland.

As announced by this Aspire Global company, the deal will see the distribution of highly sought-after, feature-packed and interesting titles that have proven to be one of the most popular among players around the world.

If you have the opportunity and want to check out the product offering of this operator, at 7melons.ch you will be able to get acquainted with the popular gaming lobby which will now be expanded with outstanding Wizard Games releases as well as products from Pariplay’s Ignite partner program.

However, this is a very important milestone for both sides. By providing them with plenty of interesting and most sought-after titles in the industry, 7 Melons will strengthen the trust of its existing clients, but also attract new ones. On the other hand, Pariplay has once again confirmed and strengthened its presence in this very popular and key market.

Words from The Representatives

Andrew Maclean, VP of Sales, Pariplay, said: “This is the latest in a string of content agreements we have reached in this very exciting regulated market. Grand Casino Bern is a household name in the country and we look forward to adding to its 7 Melons brand with content we have already seen is popular with the Swiss audience. We are very excited about working together.”

Ludwig Nehls, CEO at Grand Casino Bern, added: “Through its proprietary content and global game distribution program Ignite, Pariplay offers the best of all worlds to players and we are delighted to be able to boost the selection of titles we can put before our audience in the name of world-class entertainment.”

More on the Brand’s Previous Work

Pariplay is one of the most famous aggregators and known for its Fusion platform. Thanks to numerous partnerships, the platform offers more than 1000 titles from the industry’s premium providers.

The company recently signed an agreement with the well-known United States brand PlayStar to support the partner’s launch in New Jersey. Also, the deal will see an expansion of the operator’s offering with Wizard Games’ content. The distribution includes hit titles such as Dragons of the North, Rumble Rhino Megaways