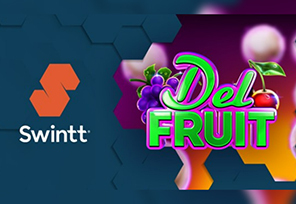 Swintt, one of the fastest growing software developers in the iGaming industry, has delivered its newest slot, Del Fruit.

This release draws inspiration from classic slot machines and is a 5×3 game with five paylines and a fruit theme.

There are four fruit symbols including lemons, cherries, oranges and grapes, while higher-value symbols are represented by BARs, Liberty Bells and Red Sevens.

What makes this Classic Game Special?

The maximum win of the game is set at 5,000x the stake, and two exciting bonus features could possibly help you achieve that!

The first will be triggered after landing three or more scatter symbols, which are represented by Books. This scatter will also act as a Wild, which means that it will substitute all regular symbols and double the winnings!

So, after landing three books anywhere on the reels, players will face an open book in which one Lucky Symbol will be revealed. Sounds familiar?

The lucky symbol expands, fills the reels and brings extraordinary prizes during 10 Bonus Spins. Players can increase the number of bonus spins, as one spin will be added whenever a new scatter appears on the grid.

The bonus game will end after Respins have been used up or when pearl symbols completely fill the reels. After that, all values will be collected.

Last, but not least, players have a chance to double and quadruple their winnings through the Risk feature. After the winning spins, just guess the color or suit of a hidden card and increase the winnings! The Risk feature can be played multiple times, but remember – if you guess wrong, the winnings will be lost.

David Mann, Chief Commercial Officer at Swintt, said: “With their iconic graphics and casino-style gameplay, Swintt Premium Games have spent incredibly popular with slot fans all around the world.

Swintt, a Malta-based software provider, has been nominated for the EGR B2B Awards in five categories, proving their quality, and we expect many more premium releases from this excellent developer in the future!