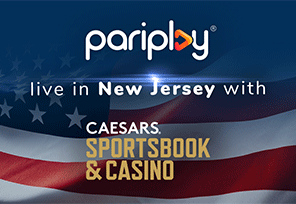 NeoGames, a technology-driven innovator and a global leader in online gaming solutions and services, has announced a new strategic deal for the North American market. This time, its subsidiary Pariplay, the industry’s leading casino content aggregator and provider, has launched with Caesars Sportsbook & Casino in New Jersey. Bonus-rich slots from Wizard Games, Pariplay’s in-house studio, are the first to debut in the Garden State as part of the Fusion platform agreement.

In less than a year after striking its first exclusive partnership in the United States that also covered New Jersey, Pariplay further strengthened its presence in this attractive regulated market, going live with Caesars Sportsbook & Casino. Part of Caesars Entertainment, a big-name international company with over 80 years of gaming expertise, this comprehensive gambling platform caters to a broad audience of players.

“We continue to make great strides in the North American iGaming market and this launch represents a major milestone for us as we continue to provide players in the region with a wide range of content that we believe will hold great appeal. It’s fantastic to have taken the first step in taking our casino products live with Caesars and we look forward to continuing to work together.”

“Pariplay has access to a huge wealth of content, including its excellent Wizard Games range, so it’s a positive step to launch its new content for our audience in New Jersey. Its games add plenty of weight to our already wide-ranging portfolio and our players are sure to be engaged and entertained by what’s offered both now and in the future.”

The studio boasts an impressive portfolio of online slots, table games, and scratch cards, as well as bingo and keno. In addition to that, the brand offers its customers a decent range of sophisticated gamification tools including slot tournaments, raffles, and wheel bonuses.

Pariplay will also supply Caesars with more US-focused content made by its Ignite® partners and third-party vendors, including both global top-performing titles and games created especially for players in the United States. Currently, the Fusion aggregation platform, which is widely known for its unified, single approach to content delivery, can brag of more than 14,000 games from over 80 providers. Everi Digital and Fazi are among the software developers that joined the platform recently.

The post Pariplay’s Wizard Games Is the First to Go Live in New Jersey with Caesars Sportsbook & Casino first appeared on RealMoneyAction.com.