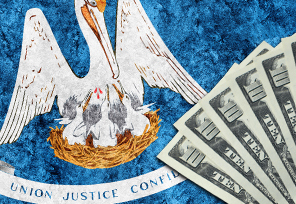 Online sports betting in the United States has officially been launched, and from the first figures, we can conclude that the punters were looking forward to the opening!

Retail sports betting was launched in Louisiana state in October 2021. However, the regulated market of this state started operating on January 28 this year.

Already on the first day, we noticed the presence of several brands. In this state, footprints were left by Penn National Gaming and its Barstool Sportsbook, Caesars, DraftKings, Rush Street Interactive, and its BetRivers Sportsbook, as well as Flutter Entertainment-owned FanDuel Group who collaborated with Boyd Gaming.

The first couple of days showed that players from Louisiana were more than happy to welcome the opening of this market, as evidenced by the high numbers! Namely, punters invested as much as $40.5m in just four days after the launch of the market – January.

However, income was not low at all. It was as much as $16.7m in the first full month, and this figure included $11.7m in income from promotional stakes. That would mean that revenue without promotional wagers was as high as $2.7m!

Football was obviously the most popular pastime for players, so casinos were enriched with $9.8m. Basketball was the second most sought-after sport and contributed $5.1m. Third place went to parlay betting with $4.4m.

When it comes to retail, players staked as much as $27.4m in February, which is, unfortunately, 44.4% less than in January, which recorded $49.3m. This figure ranks February as the month with the lowest total since the market opened.

Income from retail in February was $642,663, while January recorded 88.0% more with $5.3m, which is once again the lowest number since this market was launched.

Parlay bets contributed as much as $647,128 in income, and basketball $492,568 in revenue. However, football was a little less popular during this month, so the figure was $696,314 lower than the previous month, which contributed to a decrease in the total amount.

If we look at retail and online betting together Louisiana’s total handle was as much as $238.4m. Income was an incredible $17.3m including promotional stakes, and without them, the revenue was $5.6m.