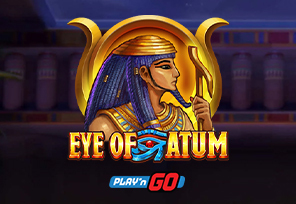 Let’s join the quest and find out what this fantastic title has to offer!

The grid is located in front of the palace and consists of 5 reels, 3 rows, and 10 fixed paylines. This high volatility online release will give you the opportunity to win up to x2000 the stake! Additionally, the theoretical Return to Player is slightly higher than average and is 96.2%.

On this journey, punters will encounter low-paying symbols that are card-themed and made up of A, K, Q, and J. However, the game will become even more interesting with high-paying ones which include The Ankh, The Lotus symbol, Crook and flail, Egyptian Cat, The Scarab beetle as well as Eye of Horus. The God Atum will be the Wild in this online slot and the scatter is the pyramid.

The Wild symbol will replace all symbols except the scatter during the game and thus help you create more winning combos. It can land on reels number 2, 3, and 4, and expand to cover the whole reel.

If 3 or more pyramids come into view, the Bonus Spins feature will be activated. 12 bonus spins will then be awarded and can be re-won if 3 or more additional scatter symbols land on the grid. However, the player will be rewarded with an additional 1, 3, or 5 bonus spins if 1, 2, or 3 the Wilds appear.

The Wild symbol will behave the same in the bonus game as in the base. But there is one significant difference. In addition to expanding and covering the entire reel, this symbol will ”upgrade” the lowest paying symbol to the second lowest-paying one.

Charlotte Miliziano, Head of Games at Play’n GO, said: “Ancient Egypt has always proved a popular theme in the world of online slots, and we’re quite partial to the theme too – players love Egyptian titles and it’s clear to see why. Opulent visuals with the endless narratives of gods and their gracious, but more often merciless, nature. Eye of Atum will power its way into the favorite list of players the world over.”

The post Play’n GO Studies Egyptian Mythology and its Gods in Eye of Atum first appeared on RealMoneyAction.com.