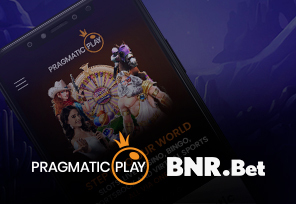 Pragmatic Play, one of the best-known iGaming software developers in the online gambling industry, has taken several key steps since the beginning of the year that significantly influenced the company’s expansion across the globe.

Judging by recent partnerships, the developer has decided to expand its business across Latin America so much that it becomes the leading brand in this region.

One of the latest agreements that the brand concluded was with Weebet, during which two of its verticals launched in Brazil, including an online slots library and live casino portfolio.

Pragmatic Play has decided to once again confirm its presence in this fast-growing market. For this reason, the company joined forces with another leading operator in this region, BNR Bet.

The company announced that punters from Brazil who opt for this platform will have the opportunity to engage in their favorite form of entertainment with products from three of its verticals.

According to the deal, Pragmatic will enrich its partner’s offering with popular online slots. The distribution will include some of the most popular online casino releases that are well known among players around the world.

The operator’s already wide games library is now expanded with fan-favorite and multi-award-winning Gates of Olympus and Wolf Gold!

Also, players will be able to take advantage of innovative live casino games including classics such as Roulette and Baccarat.

For sports fans, the brands have prepared Pragmatic’s Virtual Sports portfolio, and the developer has provided players with access to a complete vertical consisting of multiple popular releases.

Victor Arias, Vice President of Latin American Operations at Pragmatic Play, said:“We look to partner with operators with a similar business approach to us, and BNR Bet ticks all the boxes as we look to further grow in Brazil. We’re delighted to sign another multi-product deal in the country and look forward to taking our products live with BNR Bet.”

CEO at BNR Bet said:“Pragmatic Play’s multi-vertical offering has products that appeal to all demographics, and we’re very pleased to be bringing them to our players. From Slots to Virtual Sports and everything in between, it is an exciting moment for us and we look forward to seeing how our players respond to its games.”

We can conclude that Pragmatic Play wants to become the number one company in the region through recently concluded partnerships. Namely, just a few days ago, the provider sealed an agreement with the premium operator MiCasino.com. On this platform, players can find titles from the developer’s slots, live casinos, and virtual sports portfolios.