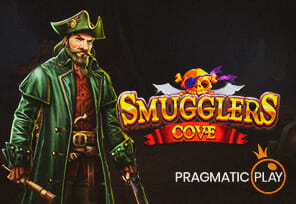 One of the leading, famous developers of live casino games as well as online slots Pragmatic Play has launched its latest online slot, Smugglers Cove, in which you will be able to uncover valuable treasure!

This latest online slot will quickly win your hearts. On the adventure you will be accompanied by wise pirates who will show you where the hidden treasure is. The grid is located on a beautiful beach on a remote island and consists of 5 reels and 3 rows. The reels are adorned with low-paying symbols that are in the theme of cards such as clubs (

). In addition to them, you will encounter high-paying symbols consisting of four pirates in blue, green, orange, and red.

If you are patient, this online release will bring you great rewards as this is a high-volatility slot. The theoretical Return to Player is 96.5%. However, depending on the operator, the percentage of RTP may vary.

Pirates bring lucky punters a chance to win up to x10,000 the bet! Isn’t that great?

The Wild symbol will be presented as a ship’s steering wheel and during the game will help you create more winning combinations by substituting all symbols except the Bonus symbol. The Bonus symbol (skeleton head) can only land on reels 2, 3 and 4. If 3 skeleton heads appear on the grid, the player will trigger the Free Spins feature!

Gold coins can appear on any reel. If 5 or more of these symbols appear on the grid, you will win a Treasure Bonus. How much you will win depends on the number of coins you hit. For example, 15 coins trigger an amazing 1000x multiplier!

Julian Jarvis, Chief Executive Officer at Pragmatic Play, said: “We are thrilled to be entering the festive period with such a strong collection of slot titles, headlined by our new release Smugglers Cove

. As always, we’re keen to see how our global audiences react to the new release and expect to see them enjoy the fantastic rewards on offer.”

This title was preceded by online slots that won the hearts of punters in a very short time such as the holiday-themed Christmas Big Bass Bonanza and Santa’s Wonderland, as well as John Hunter – Book of Fallen. The provider has announced the launch of new online slots soon!