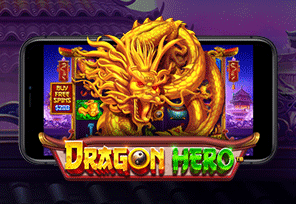 Pragmatic Play starts off the year with the launch of Dragon Hero™, a brand-new online casino slot inspired by rich Asian culture with its beautiful legends, worldwide popular lucky charms, and amazing golden treasures. In this action-packed game, the authentic taste of the Orient is spiced up by super wilds and an exciting free spins feature where bonus wheels determine the number of awarded rounds.

Dragon Hero™ is a 5-reel 4-row slot with 20 pay lines and a pretty wide range of stakes that starts at $0.20 and goes up to a maximum wager of $100. The RTP of the game is set at 96% while players who use the Bonus Buy option can count on a somewhat higher payback percentage of 96.13%.

The Art of Creating Player Favorites

Leaving behind a very successful 2022, Pragmatic Play is far from resting on its laurels. Soon after debuting in Peru in the first days of the new year through the partnership with Pentagol, the company released a new casino slot.

Speaking of the engaging novelty and the studio’s plans for 2023, Irina Cornides, Chief Operating Officer at Pragmatic Play, said:

“Dragon Hero™ is a bold and exciting title with every spin in both the base game and free spins round being able to award players multiple wilds, features and super wilds.

“Our slot roadmap for this year is set to build on the success of 2022 and players can expect the signature breadth of engaging features, themes and gameplay that Pragmatic Play is synonymous for. We’re excited at the prospect of creating content that encapsulates what it is to be a player favourite that our fans can return to time and again.”

Just like the majority of online slots from Pragmatic Play, including festive Starlight Christmas released in the middle of December to celebrate the world’s most beloved holiday, Dragon Hero™ offers engaging and rewarding extra features.

The game has two types of wild symbols: normal that substitutes for all regular icons to deliver payouts and Super Wilds that appear on reels 2, 3, and 4 and can randomly place up to three wilds anywhere on the screen.

Free spins are triggered by landing three or more scatters anywhere on the reels. Up to ten special bonus wheels can spin to award players up to 3 rounds each. During the bonus, all super wilds become sticky and stay in place to complete even more winning combinations.

Every additional scatter icon landed during the feature adds one-half of a wild to a random Super Wild on the screen. When players collect a full wild on a Super Wild, the latter will generously add one more wild symbol.