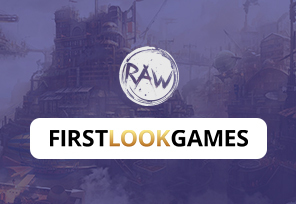 RAW iGaming, a young yet very ambitious online casino supplier that strives to create truly unique content, has become a new partner of First Look Games, the only outsourced affiliate hub with a large network of publishers and a huge combined audience of 20 million players. For RAW, which refers to itself as the pink shark in the sea of sameness, this agreement is a natural step towards expanding its global reach and strengthening the company’s position in the highly competitive gambling industry.

One of the most sought-after software providers right now, RAW iGaming is widely known for its revolutionary and patent-pending Super Slice engine which uses wheels instead of reels. Last April, the Malaga-based company purchased Leander Games to introduce its ground-breaking technology to players in Europe and South America, where the famous slot studio had very strong positions and a large customer base.

The latest deal with First Look Games will allow RAW to further increase its audience across Europe and beyond by taking game promotion to the next level literally.

“We have positioned RAW as a pink shark, something completely new in an endless sea of similar games launched every month. This partnership with FLG allows us to leverage the reach of affiliates to better promote our games and introduce our new patent-pending, innovative mechanics.

“RAW really is changing the game, and we look forward to making more players and operators aware of just how revolutionary our slots are.”

Similar to the partnership with SkillOnNet penned last year, the collaboration with First Look Games is expected to be successful and mutually beneficial. RAW iGaming can manage all information and assets via the FLG Studio Management Centre while the platform provides developers with all the necessary tools and the opportunity to choose what information is shared with publishers and when exactly that information is made available to them.

“RAW iGaming has made a big splash in the market but by using the First Look Games platform the studio can leverage the power of affiliate marketing to drive awareness among more players and operators than ever before.

“Our approved publishers have a combined player audience in excess of 20 million people, and we allow studios such as RAW iGaming to engage with this huge community of players easily and with confidence that any information published about their slots is accurate and responsible.”