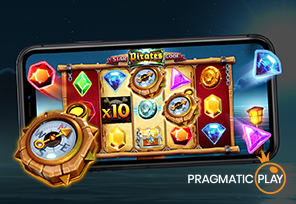 Pragmatic play, one of the leading software developers, has borrowed a couple of expensive gems from famous pirates to bring us its new hit – Star Pirates Code.

In partnership with Reel Kingdom, the company takes us on a sea cruise. However, before sailing, we will have fun on the anchored grid made up of 5 reels and 3 rows illuminated by old navy lamps.

As the rough sea hits the shore, on the grid lined with red canvas will appear the lower-paying symbols – gems in purple, green, red, and blue colors along with higher-paying ones including a silver coin, a gold coin, and a treasure chest.

Players are given the opportunity to choose a bet whose range is between a minimum of 0.10 coins, which will suit those who may be trying out an online slot for the first time, and a max bet of 250 coins while we believe that the more experienced punters will opt for it.

You can count on 10 paylines that give you the opportunity to win up to 2500X your stake. Tempting!

The Return to Player is 96.74% by default, however it may vary depending on the operator, so we advise you to check out the offer before starting the game. This high percentage was followed by high volatility with which this title was composed.

The chance of a big win has increased after the launch of special features – Wild Symbol, Wild Compass, and Respin.

The Wild Symbol can appear on 2, 3, and 4 and will substitute all symbols except Wild Compass.

Wild Compass also appears on reels 2, 3, and 4, and when this happens it will activate the respin feature. It will randomly fulfill the reels with Wild symbols.

has materialized, bringing an exciting new theme together with our time-tested mechanics. We’re eager to see how our audiences receive the pirate-themed adventure, made all the more sweet by the incredible prizes that are on offer.”

This is just another one in a series of releases that Pragmatic has provided to its players. In addition to recent hits such as Day of the Dead, Cash Bonanza and Mystic Chief, the provider’s official website has announced that the John Hunter and the Quest for Bermuda Riches online slot will be available on October 28, and Big Juan will join them on November 4.