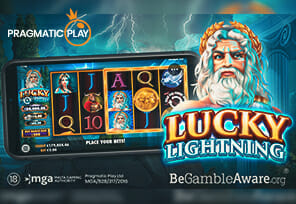 Pragmatic Play, one of the most recognizable content providers in the iGaming industry, has released its latest slot title, Lucky Lightning.

The title features an Ancient Greek setting, with symbols such as Zeus and Hera and other characters from Greek mythology, such as the Minotaur of Crete, the Griffin and the winged horde, Pegasus.

Lucky Lightning is a 3×5 slot with the Wild Respin being the main mechanic in the game. This mechanic is triggered randomly when a Lightning Symbol lands on the first two reels. The Wild Respin feature can enlarge the grid to a 3×6 layout or boost the final reels holding four rows instead of three, increasing the 243 payline number.

The second feature is Coverall and is triggered when Wilds land on the first two reels and the Coin symbols land in all positions on the reels, paying the prizes shown on all the Coin symbols. These carry multiplier values between 1 and 500 and a Jackpot can also appear randomly in the feature.

Players can also trigger the Free Game feature when at least three Bonus symbols land. This will trigger 10, 15 or 50 additional spins.

Lucky Lightning is the latest slot to join Pragmatic’s extensive portfolio of slots. The portfolio has over 200 HTML5 titles, including Buffalo King Megaways and Dragon hot Hold and Spin.

Representatives from Pragmatic, which recently teamed up with Doradobet, say that the big win potential in this game offers players a rewarding adventure and that they are sure that the title will be a hit across the markets.

Yossi Barzely, Chief Business Development Officer at Pragmatic Play, said: “Our latest release is inspired by the rich mythology that surrounds the divine occupants of Mount Olympus, and this is reflected in the title’s vast offering of features.

“With so much on offer to players, the rewarding adventure and big win potential ensures that Lucky Lightning will be a hit for fans globally!”

Pragmatic Play is one of the most renowned suppliers of content in the iGaming industry. The company offers a multi-product portfolio of innovative, regulated and mobile-friendly slots, live casino, bingo and more. Its focus is to design games perfect for player experience on mobile and desktop. The company delivers immersive and exciting games. The reputation of this provider is built on reliability and a long track record of rapid delivery and the ability to tailor its products according to the needs of the operators.

The post Pragmatic Play Rolls Out with Lucky Lightning first appeared on RealMoneyAction.com.