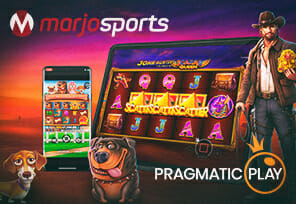 Pragmatic Play, a well-known casino software developer, recently announced that it will once again expand to Brazil. More specifically, it has concluded an initial agreement with the well-known Brazilian operator MarjoSports to launch its offering in this highly popular market.

and The Dog House Megaways

. Thanks to this collaboration, punters from Brazil who decide to look at offering this casino will be able to meet Pragmatic’s award-winning online title library.

Furthermore, the Brazilian operator has announced that in 2022, it will allow players to try out its live casino portfolio which will be available on the casino platform, hopefully soon!

This collaboration is a very important step for both companies. Pragmatic will strengthen its position in the LatAm region, and the operator will improve its position in the market by introducing in its offering some of the most popular titles in the iGaming industry.

Victor Arias, Vice President of Latin American Operations at Pragmatic Play, gave a comment on the deal and stated: “MarjoSports is an exciting operator to be working with and we look forward to supplying its customers with our slots as well as our Live Casino and Virtual Sports verticals. This gives its players an amazing variety of content and we are seeing great interaction with the slots that are now live as we await the upcoming release of the Live Casino titles too.”

Jorge Barbosa Dias, Director at MarjoSports, added: “We are excited to be making our recent partnership with Pragmatic Play live and we will now be able to give our players access to its popular slot games as we prepare delivery of its innovative Live Casino titles soon. This is yet another great novelty from the leading operator in Brazil and, soon, the leader in Latin America.”

In addition to this very important agreement, Pragmatic has many more roots in Latin America. Namely, the developer has collaborated with other well-known brands, so punters can try its products on the platforms of operators such as EstrelaBet, Facilitobet, Tower Star, Locosbet, BPlay, Winonfire, and many more.