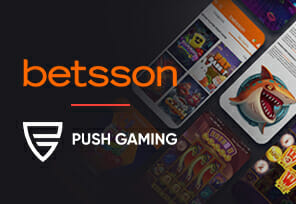 Push Gaming and its partner, Betsson, have decided to continue their collaboration while further strengthening their partnership by integrating business through Push’s RGS.

This integration of content will enable greater delivery of Push titles, and Betsson’s 20+ brands will now have access to the online releases from this provider.

Players will have access to some of the most popular slots through several operators, including the latest hits Fat Drac, Jammin ’Jars 2, and the upcoming Fire Hopper slot. This will significantly improve the presence of Push Gaming in many markets.

Paul Malt, Head of Games at Betsson said:”We’re rightly proud of the foundations we’ve built at Betsson and the way in which we provide our services to our loyal players. Having the likes of Push Gaming’s titles on our brands only furthers that provision. It makes sense to streamline the supply of games directly and we’re looking forward to bringing more of the best in iGaming content to regulated European markets.”

Additionally, Fiona Hickey, Head of Sales at Push, also spoke up and said that this is a turning point for her company. Continued cooperation with Betsson will enable the brand to ensure the provision of services around the world, which fits into their growth ambitions. She adds that several player bases available to them through this partnership strengthens the exposure of its games that punters love so much.

More About the Partners

Betsson, which also recently strengthened its relationship with Endorphina, is spread over 18 jurisdictions, which suits Push Gaming very well, considering that several players across Europe will have access to hit titles.

Push Gaming has not stopped expanding since it guaranteed licenses from the Malta Gaming Authority and the UK Gambling Commission. This year has been very successful for this provider, as evidenced by the awards at the Casino Beats Game Developer Awards, and the company was also in the narrow circle for the EGR B2B Awards 2021.