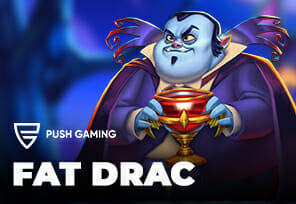 After the introduction of Fat Rabbit and Fat Santa, the third title in the row features the unique twist on a traditional theme, taking customers to the vampire’s mysterious castle while searching for spooky successes.

Fat Drac features a 5×5 reel matrix with 40 winning lines, allowing users to play in the base game and search for the Fat Drac element, which works as a Reveal and a Scatter symbol.

As soon as the Fat Drac symbol appears on the reels, it can unleash a paying or a bat element. The bat symbols will fly to an instant prize bubble, releasing an attached value. When the Fat Drac appears with one or more goblets on the reels, the free gaming round is activated.

When it comes to instant prize bubbles, they are available in both the base game and extra gaming round offering multipliers that can enhance up to 50,000. A total of 7 prize bubbles are displayed and nudge by one place with every spin. A Fat Bat element can also appear at any time, with a catalog of all prize bubbles.

Players should also pay attention to a meter that tracks Drac’s progress as he takes more goblets with every matching symbol. Each time a level goes up, bonus spins are released.

“We’re looking forward to the latest release in our Fat series. Fat Drac is another game with our typical awesome production values, and has an even fatter selection of engaging features!”

In time for Halloween, but relevant any time of year, Fat Drac is full of random rumbles and mischievous bats which add a real depth to the theme and overall gameplay.”

Push Gaming is a developer of premium casino content and first-class gaming entertainment. The brand has already partnered with top-tier companies in the industry to deliver high-quality games. Some of the most popular games from the brand are Mount Magmas, Booty Bay, Dinopolis, Land of Zenith, Razon Shark, Joker Troupe, and many more. When it comes to Push Gaming’s partners, we can mention premium companies such as Interwetten, Iforium, Dunder, BetVictor, Betsson, Royal Panda, and Megarush among others. It has licenses from the UK Gambling Commission and the Malta Gaming Authority.