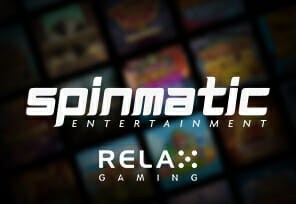 Relax Gaming (RG), one of the leading casino software providers, has added the famous Spinmatic slot studio to its list of Powered By Relax partners. The latter brand’s hit titles such as Sizzling Blaze and Fruity Beats Xtreme will now be expanded to the European market with the help of numerous operators with which Relax cooperates.

Spinmatic, which also recently teamed up with Digitain, is a relatively new developer founded in 2017, and already boasts over 70 titles, of which two were recently on the shortlist for the SBC Game Developer Awards.

A Cooperation that Won’t Go Unnoticed

Commenting on the launch, Simon Hammon, CPO at Relax Gaming said: “It’s with great pleasure that we welcome aboard Spinmatic to our Powered By Relax program. It has already made its mark in slots provision with a number of high-quality casino titles and that’s exactly what we look for to boost the content we offer.”

Adam Spisak, Sales Director at Spinmatic, said that choosing a distribution partner is the key element of any good business. He says the choice was easy when it comes to RG. He adds that its reputation is not in question and that they are sure it will offer the support needed to boost the company’s growth.

Relax was founded in 2010 and has achieved great success so far. It has expanded its business network to several countries including the Netherlands and the United Kingdom. This provider has partnered with well-known companies such as NetBet, Holland Casino, and William Hill.

Some of the slots recently rolled out by this casino software developer include hits Cluster Tumble, Mega Mine: Nudging Ways, Helios ’Fury, and many others.