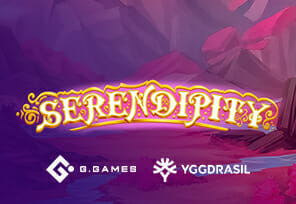 Yggdrasil, together with Gluck Games, has released new slot – Serendipity. The grid consists of 5 reels, 3 rows, and 10 paylines. Surrounded by golden threads, the grid is also adorned with low-paying symbols that are card-themed (A, K, Q, J, 10 and 9) including high-paying ones such as a gold coin, four-leaf clover, ladybug, and feather. The highest paying symbol is the Lucky Lady, and if five of the same symbols land on the grid, it can bring you a win up to 900 coins! Impressive!

The theoretical Return to Player of this game is slightly lower than average and is 95.23%. The maximum payout that awaits you is 5,194x! The minimum bet you can place is 0.05 coins, which will surely suit those who are entering the world of gambling for the first time, while the maximum bet is 20 coins.

Stuart McCarthy, Head of Product and Programs at Yggdrasil, said: “Serendipity offers players a calming, peaceful environment where Lady Luck shows up to grant huge wins to lucky players. It offers a different gaming experience for our players, with the straightforward gameplay and multiplier-heavy wins, which is something we’re very pleased with, as the YG Masters initiative goes from strength to strength.”

The Wild symbol is the Lucky Lady, which can replace all symbols during the game. To enjoy the Free Spin feature, you must land between 3 and 5 scatter symbols on the grid.

Yggdrasil has also recently released hit titles such as Glory of Heroes, 90K Yeti Gigablox, Golden Fish Tank 2 Gigablox, plus the launch of new titles this month such as Lady Merlin, 5 Clans, Valhalla Saga, Monster Blox, and many others.

The provider recently expanded its business network to North America following a partnership with IGT. With this deal, a wide range of Yggdrasil titles will be available to players across the US and Canada.