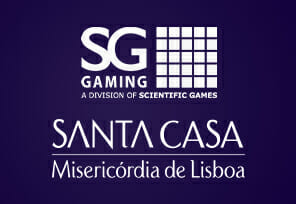 Santa Casa is a charitable organization that serves as the operator of the national lottery and retail betting in Portugal, and is ranked as the world’s Top 20 performing lotteries.

SG supplies its top-performing instant games to 48 European lotteries, including Lotterie Nazionali in Italy, Francaise des Jeux in France and the National Lottery in the United Kingdom.

Representatives from SCML say that they are happy about signing a partnership with Scientific and that the titles will help them generate maximum funding that will benefit charitable causes.

Officials from Scientific Games say that they are honored to be the exclusive instant games supplier to Portugal’s lottery operator and that they are looking forward to working with SCML over the next three years.

“We are honored to be the primary instant game supplier to Europe’s top four performing lotteries and nine of the top 10 performers globally. Scientific Games is excited to expand our longtime, successful relationship with SCML in Portugal to continue the Lottery’s growth by offering exciting instant game entertainment to Portuguese players while responsibly generating maximum proceeds for the Lottery’s charitable cause,” said John Schulz, Senior VP of Instant Products at Scientific Games.

Scientific Games has roots dating back to the 1930s and now it is the gaming and lottery leader in the iGaming industry and its mission is to empower its customers by providing them with the world’s best gaming and lottery experiences.

Its casino, interactive, and instant lottery games are designed to reach players wherever they are and can be accessed at any time and through any channel, they choose, be it casino, retail, or digital.

The company has around 9,500 employees worldwide and is headquartered in Las Vegas. It serves customers on six continents. The brand provides customers with security, creative content, operating efficiencies and innovative technology. SG’s SG Digital, together with NYX Gaming Group, makes the most diverse supplier of digital gaming and sports betting technology and content in the industry.