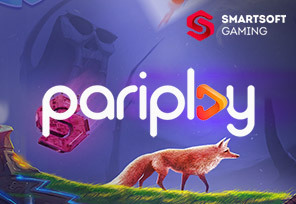 SmartSoft Gaming, a fast-growing casino software developer, has announced it has concluded another major distribution deal!

This popular B2B brand took an important step at the end of last year when it joined forces with the well-known aggregator, SOFTSWISS.

However, the new content deal will see a handshake between this popular provider and the well-known brand, Pariplay!

As announced, the developer will launch its wide portfolio on the new partner’s platform.

From now on, the Fusion platform will be enriched with several fan-favorite and engaging online casino releases that are known for innovative features.

Over a hundred products will be included in the distribution! SmartSoft has so far expanded its portfolio with plenty of games including slots, keno, and roulette as well as crash titles called XGames.

The Fusion portfolio has collected over 13,000 products to date, developed by some of the most famous and leading suppliers in the iGaming industry.

In any case, both brands will have great benefits. First, SmartSoft will expand its global reach and reach an even wider audience across the globe. On the other hand, Pariplay will further improve the offering of its platform and thus improve its position in the industry.

Callum Harris, Director of Partnerships at Pariplay, said: “SmartSoft Gaming produces a range of innovative and interesting titles across a range of gaming verticals and it is fantastic to be able to bring these onto the Fusion® platform. We believe these games will resonate with the customers of our operator partners around the world and are delighted to welcome SmartSoft aboard.”

Saba Chkheidze, Head of Partnerships at SmartSoft Gaming, said: “Pariplay’s Fusion® platform offers us access to a wide number of operators in all corners of the world, so it’s a landmark moment in our growth journey to have forged this partnership. We believe our games have the quality and inventiveness to stand out from the crowd and this alliance with Pariplay will enable us to truly make a mark globally.”

In addition to the above, we must say that Pariplay works tirelessly to improve its platform. So, some of the developers whose products were included in this portfolio include Spinberry, which recently launched its first title on this platform, G. Games’ plethora of outstanding online casino releases, and Thunderkick as well as much more.