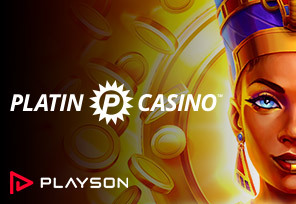 As the iGaming industry has become more and more popular, companies are working tirelessly to reach the top of the ladder and become leaders!

A new partner will help the provider in this fight, and thanks to this agreement, the company has further expanded its business scope!

Although it recently strengthened its presence in Europe thanks to a deal with Inbet, the company decided to conclude another deal with the European operator.

The company proudly announced that it shook hands with a well-known operator in Germany to further its foothold in this relatively recently regulated market.

As stated in the announcement, PlatinCasino has been added to its list of partners and, taking its portfolio further.

It was agreed between these two giants that Playson will enable punters from Germany to access a large number of the brand’s engaging, top-tier, and hit titles.

Players who check out the casino’s platform will have the opportunity to get an unforgettable iGaming experience with these releases thanks to interesting gameplay and innovative features.

Blanka Homor, Sales Director at Playson said: “We’re pleased to announce our deal with PlatinCasino, a major player in Germany and one which will help us maintain a strong presence in a developing region. As the online market in Germany begins to take off, we feel this partnership will only grow in significance – giving us the opportunity to benefit from a promising jurisdiction for years to come.”

The partnership between these two favorites will be an important milestone for both sides. First, Playson will further expand its global reach and thus come closer to fulfilling its goal of global growth by providing its releases to the German audience.

On the other hand, the operator will fulfill the promise he made to his clients by providing them with some of the most famous online casino releases developed by one of the leading providers.

As we have already mentioned, Playson has been very productive lately, and in addition to fantastic titles, the company has also been working on partnerships.

One of the video agreements is the consolidation of the developer’s position in Romania thanks to the collaboration with Magic Jackpot.

As stated by the brands, the distribution includes top-tier titles including Eagle Power: Hold and Win, the very popular Solar Queen Megaways as well as Burning Wins x2. These products are already available to players from Romania on the operator’s platform.