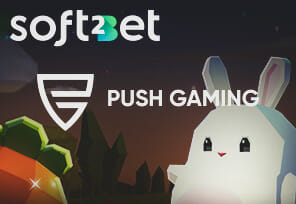 Push Gaming, one of the well-known casino software developers, has joined forces with the famous casino and sportsbook platform provider Soft2Bet to further launch its broad portfolio. Under this content integration agreement, the Push product library will now be available to a number of Soft2Bet’s successful brands.

This collaboration will benefit both parties as this already widespread developer launches its portfolio to an even larger number of key markets. On the other hand, Soft2Bet and its brands will be able to offer their customers some of the best titles.

Per the agreement, some of the titles that will be available across Soft2Bet’s brands include the latest hit Fat Drac, Jammin ‘Jars 2 (award-winning slot), and upcoming release Fire Hopper, as well as those yet to be launched.

The online casino brand Cadabrus and Betinia were recently launched, but these two brands will also enjoy the benefits of this partnership and will offer even greater content to many users in several key markets.

Daniel Mitton, Head of Casino at Soft2Bet, said: “Push Gaming boasts some of the most engaging titles in the industry and it’s fantastic to have them on board. Adding their games to our platform adds yet another string to our bow and gives operators peace of mind knowing they can share high-quality products with their customers. As a platform provider, it’s our aim to build up one of the most comprehensive portfolios in the sector and this direct integration goes a long way to helping us achieve that goal.”

Fiona Hickey, Head of Sales at Push Gaming, also commented stating that it is their pleasure to be collaborating with this new partner because the two share the same philosophies when it comes to entertainment and player-led focus. She adds that Push’s content will be available on a first-class platform.

More About Push Gaming and Its Development

Push Gaming recently solidified its position in the UK market by entering into a new partnership with MrQ online casino. This year, the provider has made a lot of progress and expanded its network to several markets.

This past April, the supplier also stepped into Germany thanks to a partnership with United Remote. Also, in June, players from Denmark were given the opportunity to access some of the best games from this developer, which was contributed by its deal with Danske Spil.

However, some collaborations have proven to be very successful, so they have only been “renewed” this year, and are a continuation of the deal with Hero Gaming and Betsson.