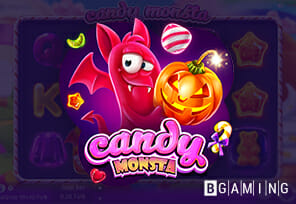 Halloween, as one of the most important holidays for residents of Canada, US, and Ireland is coming. Players from these countries, as well as many others, will celebrate it on October 31st this year. That is one of the reasons why the slot providers are making an effort to present their titles in that spirit. Among them is the casino software developer BGaming.

Colorful graphics are set to a bright Halloween theme. This year we will be honored with fruits, candies, and other sweets. Candy lovers, get ready!

The grid consists of 5 reels and 3 rows, and the journey begins with 20 paylines.

Halloween can’t go by without carved pumpkins! However, this year they should not be kept as a keepsake, but instead serve as 3,4 or 5 scatter symbols on the reels. When this happens, pumpkins will explode triggering Free Spins. During the bonus, spins can be retriggered which means that they can be unlimited!

During the bonus spins, the sticky wilds remain locked in place and remain until the ed of the feature.

A Bright Take on Halloween

Katherine Puteiko, CS Marketing Manager at BGamin, gave her comment: ”We didn’t want Candy Monsta to be dark and spooky as Halloween games usually are. It’s a bright and funny game! Candy adventure will be relevant for the whole year! By the way, BGaming will add two more Halloween-themed slots to its collection shortly. So that every player can choose the best one for yourself!”

Next in line after these impressive games is Fruit Million. It will be officially presented on October 14th, decorated with fruits. Something that will definitely make you even more impatient while you are waiting for the game to appear is the RTP of the game which is above average and stands at 97.1% as stated on the official BGaming site.

This product will be accompanied by the beautiful Lucky Lady Muerta on the 18th of the same month.

BGaming is a creative company that appeared in the iGaming industry with online games in 2012 and is growing noticeably fast. Although headquartered in Malta the divisions of his company were expanded to Minsk. Last but not least, we will mention an important detail in which the company supports all major currencies including cryptocurrencies, and many others used in online casinos.