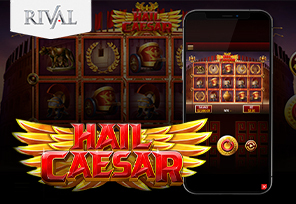 Rival, one of the world’s most renowned providers of US-friendly online casino games, has unveiled its brand new video slot, Hail Caesar. Set to go live on July 25, this spinning adventure is themed around the untold riches of the once prosperous Roman Empire and chock-full of advantageous extra features. Apart from wild multipliers and free spins with sticky wilds, this title offers an exciting pick’em bonus – collecting bounties has never been more fun!

Soon after taking players on a fantastic journey through the jungle in its 720-way Incan Rich, Rival offers another awe-inspiring destination where an abundance of wealth awaits all slot buffs who give preference to low volatility games with their somewhat smaller yer more frequent wins.

Set inside a magnificent Roman Colosseum…

…Hail Caesar is a 5-reel video slot with 25 non-fixed pay lines, which means players can not only choose the coin value and the number of coins but also adjust the number of active lines. Such flexibility allows for a broad range of stakes to suit every style of gambler since the minimum bet is only $0.01 a spin while the maximum possible wager is an impressive $62.50.

The standard 5×3 grid is home to handsome Julius Caesar who plays the role of a wild symbol and to stunning Cleopatra who is one of the high-paying icons. In addition to that, the paytable features a plethora of finely crafted items such as the wolf statue, temple, bust, laurel, helmet, labrys, golden eagle, coin, chariot, and chalice.

Roman Triumph and the Ides of March

Even though beautifully designed, Hail Caesar is not one of those online slots that are worth spinning only for their popular theme and superb visuals. To the delight of players, just like the majority of titles from Rival, including the recently released Bigger Cash Win, this game is enhanced with some awesome bonus features able to generate plenty of excitement and really epic prizes.

Hail Caesar will be available at Rival-powered websites starting from July 25.

The post Step into the Roman Colosseum and Celebrate Victory with Rival’s Hail Caesar Slot first appeared on RealMoneyAction.com.