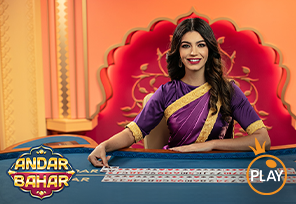 Pragmatic Play, one of the most famous providers in the iGaming industry, has announced two new Indian-themed titles. Not only that, but both of the games go live! Andar Bahar and Roulette India are now in live versions.

The games come to us from Bangalore, Southern India. Like everything new, it will be very interesting to explore both games.

What The Titles Have to Offer

Both games will be available to players 24/7 with multitudinous 4k cameras. Although colorful, the Indian theme has more advantages which makes it very popular among players around the world. This time, the provider combined the online releases with land elements and made them uniquely interesting, broadcasting right from Bucharest, which is not a surprise considering the culture of this city.

A very interesting card game, Andar Bahar, will be available to players in a live variant. Since it is not as popular as Roulette we will explain the rules a little better. The goal of the product is that the player should place his bet on the side of the card that in his opinion will match the Joker card. And it will break the monotony that some games possess. The title is played using one deck of fifty-two cards.

In addition, this release also offers side bets such as Straight Flush, so if you have ever played Baccarat or Dragon Tiger, you’ll likely enjoy.

Yossi Barzely, Chief Business Development Officer at Pragmatic Play, commented: “Andar Bahar is an iconic card game that will appeal to many, and we’re very pleased to be able to add it to our offering. Combined with Roulette India, we’re continuing to add more niche game content to our Live offering, and we’re extremely excited about the trajectory our Live Casino offering is on.”

Pragmatic Play is a company that offers hundreds of casino games designed in an HTML format. It was established in 2007. It is legal and licensed to operate in several countries, such as the UK and Malta. On July 22, 2016, the supplier became the property of IBID Group.

In addition to a large library of bingo games and live casino games, this provider does not cease to surprise us with its other titles as well. Regardless of the fact that it is one of the leading brands out there, the level of service remains the same, and it launches up to 5 new slots every month. It is important to note that players from as many as 14 countries can access the brand’s offerings in their own language.