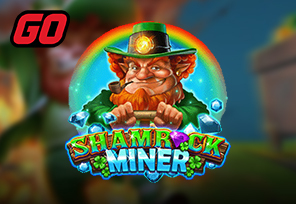 Just before the New Year, Play’n GO wishes all online casino players the luck of the Irish in unearthing sparkling diamonds and a hefty jackpot in its latest slot Shamrock Miner. The fifth title in the company’s popular Leprechaun series, it is stuffed with free spins and wild multipliers, delivering massive wins of up to 5,000x bet.

During the free spins feature, the standard 5×3 grid expands into a large diamond mine where each reel can contain up to 7 symbols to generate even bigger payouts. Dig deep, collect different diamonds, and get ready to watch the Leprechaun exploding these precious stones from the rock!

Entertainment in Every Spin

Even though last week Play’n GO already celebrated the end of the year with the launch of Mötley Crüe, the Swedish software developer has decided to offer one more present to all the fans of great online casino slots. For truly entertaining winter holidays, players are invited to help the Leprechaun, who trades gobs of gold for diamonds, mine an Irish-sized jackpot by collecting precious gems to fill up a train of miners’ carts.

Built on the popular reel mechanic of other smash hits, Shamrock Miner offers a captivating storyline supported by exciting and rewarding bonus features. This win-win combination makes a great addition to the leprechaun-themed slots from the brand’s portfolio, including Leprechaun’s Vault, Leprechaun Goes Egypt, Leprechaun Goes to Hell, and Leprechaun Goes Wild.

“There is something really charming about our leprechaun titles. We love tying the features with lore. Everyone knows what awaits at the end of the rainbow, so it was fun to go underground for this one.

“This is a really fun game with entertainment in every spin.”

Immersive gameplay is not the only reason to spin the reels of Shamrock Miner. Players have to prepare for loud detonation because landing at least three scattered Dynamite Sticks triggers an explosion of free spins. Hitting three, four, or five scatter icons will bring 10, 15, or 20 rounds respectively while every fourth leprechaun that appears during the bonus will not only re-trigger the feature but also add win multipliers!

On any spin, a random multiplier of up to 10x can show up above the reels. Diggers who can hit the right crack in the earth’s core on a Win Multiplier reel with a diamond and wild will watch the cash value of their diamonds growing before their eyes. For even more excitement and larger wins, every fourth wild collected will expand the reels with one row, up to a maximum height of 7 rows.

December was very eventful for Play’n GO and besides the launch of several new slots, the company added one more regulated US market, stepping into West Virginia.