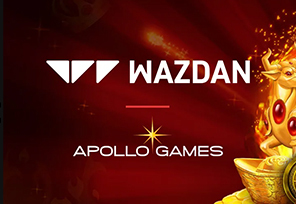 Wazdan, one of the industry’s most acclaimed software providers of online casino slots, has chosen Apollo Games as the first operator in the Czech Republic to offer its immersive titles. At the moment, the company has sixteen games certified for the Czech market, including such universal favorites as Magic Fruits Deluxe, Magic Stars 3, and Sizzling 777 Deluxe.

While more engaging adventures are waiting in the wings, local players already can benefit from Volatility Levels™ and other innovative features designed by the brand to provide the ultimate gambling experience.

Soon after going live in the Czech Republic, Wazdan unveils the name of its first online casino partner in this newly-entered regulated market. For a successful debut in a big style, the company has partnered with Apollo Games.

“Apollo Games shares our dedication to innovation and development in entertainment, so we’re delighted to have formed this partnership together.

“It’s fantastic to see our games live in as promising a market as Czech Republic with an operator that has such in-depth knowledge of their customers’ preferences as Apollo Games. We look forward to seeing where this deal takes us as both our companies continue to grow.”

“We’re thrilled to be the first online casino in the Czech Republic to introduce games from Wazdan.

“Their games are of the highest quality along with several unique features. Thanks to Wazdan, we will enhance the gaming experience for our players.”

December has been a busy month for Wazdan, with the Czech Republic being just one of the newly added European gambling markets.

After signing an agreement with Alphawin to debut in Bulgaria, the company made another significant step to further expand its presence across the old continent and penned a deal with Paf to strengthen its position in the thriving Spanish market. Plus, Wazdan also expanded its footprint in Switzerland, following a partnership with mycasino by Grand Casino Luzern.

During the last month of the year, the brand released two new games: 9 Coins™ Grand Gold Edition and Hot Slot™: Mystery Jackpot Joker. The latter is a thrilling addition to the renowned Hot Slot™ collection amplified with the exhilarating bonus feature that gives players plenty of chances to trigger Minor, Major, Joker, or Grand Jackpot and win up to 1,000x bet.

Wazdan has been shortlisted for the US Gaming Company of the Year title at the International Gaming Awards (IGA), which is a recognition of its impressive growth in North America over the last 12 months. The company has also been nominated for the Game of the Year award for its top-performing 9 Coins™, with the winners to be revealed at a prestigious ceremony during the week of ICE London 2023.

The post Wazdan Chooses Apollo Games to Premier Its Slots in the Czech Republic first appeared on RealMoneyAction.com.