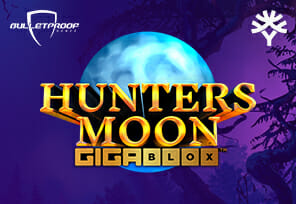 One of the most popular holidays in America, which we often see being celebrated is=n Europe is ahead of us. The evening before the Christian holy days of All Hallows’ Day is intended for Halloween which we all eagerly await.

In that spirit, Yggdrasil and Bulletproof Games bring us a new title called Hunters Moon GigaBlox

, and we must admit that we are more than thrilled! The background of this product is dark, a perfect addition for a spooky theme!

With a bit unusual, but not so rare 6×6 Gigablox

reels, this game has 50 paylines, which makes it one of the titles that belong to the GEM collection of Yggdrasil. Let’s look at the standard symbols first:

Prizes worth between 0.20X and 8X your total bet can be won if you are persistent enough to combine three or more of the same symbols.

In addition to the standard symbols, the novelty also includes a giant symbol, with a minimum size of 2×2 which we could see in products like Lucky Neko and Gator Gold. This partnership between Yggdrasil and Bulletproof Games will not go unnoticed!

By indulging in this new title, players can win up to €515,000, which, if divided by the maximum bet would mean that no matter how much money you invest you can win 5,150X your bet.

In case you are not a high-roller, this release offers you the opportunity to gamble with a minimum stake of €0.20.

The RTP is around the average and is 96%, and the product is designed to have medium-high volatility that will undoubtedly keep you engaged.

Symbols on the horizontal reel move to the left after each spin, so don’t be surprised if one of the wild or bonus symbols falls on the reel itself and turns all the adjacent symbols it touches into wilds.

In addition to all of the above, we must note that players who launch this online release for the first time, can count on a demo version on the official Yggdrasil site. This means that they can test these reels before investing real money in the main version. This title is available on all mobile platforms and will surely suit everyone’s desires.

Stuart McCarthy, Head of Product and Programs at Yggdrasil, said: “As Halloween creeps towards us, a brave hunter reveals herself as she searches the dark night for huge wins. The newest YG Masters game to include GigaBlox