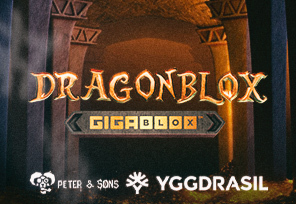 Yggdrasil, one of the most prominent and acclaimed casino software suppliers of premium and engaging online casino content, joins forces with the well-known and promising provider Peter & Sons to bring a fantastic and unforgettable iGaming adventure.

This is not the first time that these two giants have collaborated. On the contrary, Yggdrasil and Peter & Sons have so far presented several games that in a short time experienced great popularity among players across the globe.

Among them are The Legend and Musashi, Wild One, Wild Duel, and many others!

However, let’s check out the new adventure and see what the brands have come up with this time!

As we can conclude from the name of the slot, the developers are taking us to a prehistoric sci-fi world where you will get to know various creatures.

The game will be played on a 6×6 grid that features 50 paylines!

The Return to Player is a shade below average and amounts to 95.9%, and players who decide to engage in this exciting fight will have the opportunity to win up to x5,000 the stake!

Through this high volatility online casino adventure, players will be introduced to low-paying casino-themed symbols (clubs, spades, diamonds, hearts, and stars) as well as a male with a dagger, a wizard with a long beard, and a young female archer, a Viking, and a knight.

Another symbol that will make this adventure interesting is the Wild, which will replace all symbols except the scatter during the game.

If you want to trigger the Bonus Spins feature, it is necessary that 6 scatter symbols appear in view. Players will be awarded as many bonus spins as the number of scatters that participated in the activation of the feature. Each additional scatter that lands award the punter with 1 additional bonus spin.

Stuart McCarthy, Head of Product & Programs at Yggdrasil, said: “Our YG Masters program has entered its fourth year and we’re delighted to be collaborating with Peter & Sons for another mythical masterpiece, Dragon Blox GigaBlox. Combining their unmistakable art style with exciting mechanics and bonus features is a winning formula, and we’re very happy with our latest launch.”

Yann Bautista, Business Development Manager at Peter & Sons, said: “Last year saw us come on in leaps and bounds as a studio, and we’re thrilled to hit the ground running in 2023 with Dragon Blox GigaBlox. It builds on what we’re trying to deliver to players while utilizing another of Yggdrasil’s fantastic GEMs to give a player-favorite experience.”

The post Yggdrasil and Peter & Sons Embark on Exciting Adventure Only in Dragon Blox GigaBlox first appeared on RealMoneyAction.com.