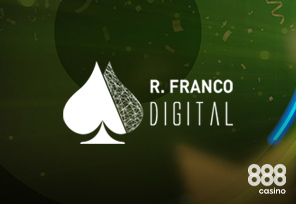 Franco Digital, one of the fastest growing and promising casino software suppliers in the iGaming industry, is starting the new year with new successes in Spain!

First, we must mention that 2022 was a very successful year for the developer who made numerous partnerships and launched several titles that became a big hit among players, including the fan-favorite Vacuum Buster.

However, let’s see what the company started this year with and what we can expect from the latest collaboration…

After a short break, R. Franco Digital found itself in the spotlight again after signing another major distribution agreement with 888casino, on whose platform you will now be able to find a wide range of engaging and feature-packed online casino games!

Among the titles available are ever-popular products from R. Franco’s ever-popular collection of online slots such as Witches South, Vacuum Buster, and Cyborg 30L.

Additionally, all new titles will be available on the operator’s platform in the future.

This latest move is quite the milestone for R. Franco as it teams up with a reputable brand…

Mario Benito, CCO at R. Franco Digital, said: “This deal represents another milestone on our journey and as Spain’s leading supplier of casino content, it’s fantastic to be teaming up with an operator that has both a prestigious reputation and a huge customer base. We look forward to putting our games in front of more players than ever before, as we continue to make strides both at home and in regulated markets across the world.”

Talya Benyamini, VP of B2C Casino at 888, said:“We are delighted to partner with R Franco Digital and expand our portfolio of high-quality and entertaining games for players in Spain. In addition to developing our own titles in house, partnering with developers like R Franco Digital is a critical part of our content and product leadership strategy and ensures that we offer players new and differentiated experiences. We look forward to working with Mario and the team over the months ahead.”

The deal marked a major milestone for both brands, and we believe that the expansions are not over, but that we can expect more amazing news from both sides in the upcoming period!