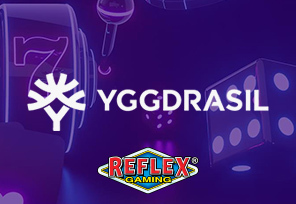 Yggdrasil, one of the most prominent and well-established casino software suppliers of premium and engaging online casino releases, announced another significant step thanks to whom the brand will further strengthen its position in the industry.

Just a few days ago, it released its latest online casino slot called Dawgs 2 GigaBlox in partnership with Reflex Gaming, and now these two brands are teaming up again!

Yggdrasil, one of the industry-leading publishers of outstanding online casino content, has announced that the company once again joined forces with Reflex Gaming to introduce its Game Engagement Mechanics (GEMs) to the land-based sector.

The company also added that this is the first time to present its GEM in this field.

Based on the agreement, Reflex will add its partner’s Game Engagement Mechanics to its retail offer!

As stated, it will be available across betting shops, arcades, pubs, and similar recreational venues.

Yggdrasil boasts of a wide GEMs offering that consists of Gigablox, MultiMax, GigaRise, Splitz, FastPot5, and DoubleMax, as well as the recently launched WildFight and DuoMax.

These two brands shook hands for the first time in 2020, and the partnership saw the launch of as many as 11 online casino releases such as Hillbilly Vegas, Time Machine, Prized Pets Gigablox, Dublin Up DoubleMax, and Desperate Dawgs 2 Gigablox and others.

Stuart McCarthy, Head of Product & Programs at Yggdrasil, said:“Strengthening our partnership with Reflex Gaming to bring our GEMs to the land-based space is a great milestone for us. We have already had great success together, releasing a number of high-performing online titles to players and we are thrilled to now take this to the retail sector. This deal is testament to the strength of our GEMs and the potential it has to take the player experience to a new level.”

Mat Ingram, CPO at Reflex Gaming, said: “We are extremely pleased with what we have achieved as a YG Masters partner in the last few years, and we have been very impressed with how the GEMs have performed on our online titles. Bringing the mechanics to UK players of our retail content is extremely exciting for us and we believe they offer great potential also in this space and look forward to further expanding our successful collaboration.”

The post Yggdrasil Partners with Reflex Gaming to Launch Game Engagement Mechanics in the UK! first appeared on RealMoneyAction.com.