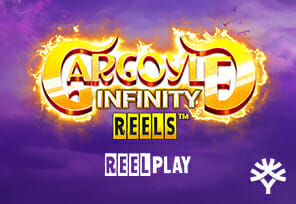 Yggdrasil, one of the most recognizable iGaming content suppliers, has released its latest title, in collaboration with ReelPlay, Gargoyle Infinity Reels

The title is set in a castle tower, and the players awaken the Gargoyle King and spin the reels to win up to 888 times the set bet.

The game kicks off with three reels filled with gargoyle symbols and winning combinations offer limitless additions of reels thanks to the Infinity Reels mechanic. Players can win 10 additional spins if they land three Portal Stones scatter symbols. During the free spins, reels can grow to a maximum height of six symbols when a wild appears, which results in even more ways to win.

is the latest title to be released via the YG Masters program, which utilizes Yggdrasil’s GATI technology. GATI allows developers to deliver preconfigured, regulation-ready development toolkit and produce top-performing content.

offers loads of fun and that they are looking forward to working with ReelPlay on more titles.

offers beastly fun and monster prizes and is a great addition to the YG Masters portfolio. The program continues to produce hit after hit with the titles created by ReelPlay and their partner studios gaining a large following due to the fantastic win potential the games offer.”

Officials from ReelPlay say that working with Yggdrasil has allowed them to gain huge momentum and that they are very pleased about the content they have created.

David Johnson, CEO at ReelPlay, said: “Being part of the YG Masters program and utilising the GATI technology has allowed us to gain huge momentum in our game development and we are very pleased with the content we have created so far. Gargoyle Infinity Reels

is a slot that takes a new spin on our Infinity Reels mechanics with a fun mystical theme and big wins on offer.”

More About the Brand

Yggdrasil was founded in 2013 and during its years in the iGaming industry became one of the leading providers of superior online gaming solutions for iGaming operators. Yggdrasil operates within the regulated remote gambling industry and is fully committed to fulfilling the licensing requirements of the licensing jurisdictions. The company holds licenses from the United Kingdom Gambling Commission, Malta Gaming Authority and the Romanian regulator (ONJN). They received the first license back in 2013 and in 2015 the company reached a milestone by releasing its in-game promotional tool Boost

The success of the company was recognized many times. It managed to win the Innovation in RNG Casino Supplier Award at the EGR Awards in 2019 and 2018, Innovator of the Year award at the International Gaming Awards in 2018 and again in 2019.