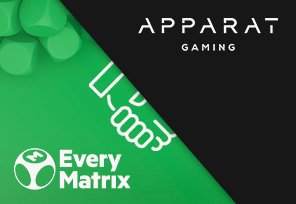 EveryMatrix, one of the leading casino software providers in the iGaming industry known for its innovative platforms and premium content, has prepared a new partnership that will further improve the company’s position in the industry.

The brand recently sealed a deal with one of the leading B2B brands 888casino. The collaboration between these two brands saw EveryMatrix leaving its footprint in the US market by launching its digital products as well as online casino releases developed by Spearhead Studios and Armadillo Studios.

EveryMatrix is more than honored to present its latest news! As stated by the company, this popular developer has joined forces with one of the best-known casino software developers Apparat Gaming in order to further expand the offering of its platform.

Apparat products will now be integrated on EveryMatrix’s iGaming Integration Platform, CasinoEngine. This means that all operators who have so far made a deal with the platform owner will have access to these incredible, amazing, feature-packed, and engaging online casino releases.

Also, all upcoming titles will be part of this platform once they become live.

The integration will include several titles, and operators will be able to take advantage of the hugely-popular Total Eclipse and 40 Sevens as well as much more to come soon.

Thomas Wendt, Co-founder, and Director of Apparat Gaming say: “As a developer looking to strengthen its presence in key markets and add its titles to the game lobbies of popular operators, partnering with EveryMatrix is a must. This agreement will see our games go live with household name online casino brands in key European jurisdictions and beyond, allowing Apparat Gaming to super-charge the momentum we have already built since launching our first series of slots last year. We have a very exciting product roadmap for the rest of 2022 and look forward to seeing our next run of titles go live with EveryMatrix and its operator partners.”

Amund Stensland, COO of CasinoEngine at EveryMatrix, comments: “Apparat Gaming is making a name for itself in what is a hugely crowded and competitive market by taking a different approach to slot development, with each of its titles coming with this German accent touch. Apparat Gaming is a strong addition to our content offering and it is partnerships such as this that ensure we remain one of the leading platform providers and game aggregators in the market.”

EveryMatrix recently delighted punters with West Virginia cheese. Namely, the company said that it is ready to win this US state thanks to the recently guaranteed face that the brand received from the West Virginia Lottery Commission.

Apparat has also taken several important steps since the beginning of the year, which significantly influenced the improvement of the company’s position in this industry. It concluded another major agreement recently with choice number one casino United Remote.