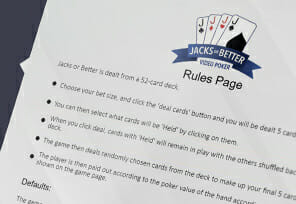 PureRNG casino software developer, developed another variant of the popular Jacks or Better. The online game gives players the opportunity to enjoy a game of video poker, but with slightly changed rules.

Standard video poker is played with a deck containing 52 cards, and the player is initially dealt 5 cards. This is the same with PureRNG’s version. However, compared to standard video poker in which the cards you do not choose are discarded, in the version in question, the “discarded” cards are returned to the deck, which allows for the chance that those cards may come back to you again in the same hand.

A player checking out the variant became suspicious and reached out to pro, Michael Shackleford, of our sister site Wizard of Odds and described his concerns regarding the card rule. However, after a detailed analysis, Mike found that the rules clearly state “cards with ‘held’ remain in play with others shuffled back into the deck.”

As he studied this game, Mike looked at three possible strategies a player can opt for:

He stated that he may have otherwise called this cheating,, but since the rules are clearly defined, he cannot do that.

On his page, he wrote a review about this product and clearly emphasized the rule as he believes that less than 1% of punters read the rules before wagering on any given game. He also opened a discussion on the forum regarding this version of the game where punters around the world can openly express their views. Opinions have been divided. Some commentators said the game thrills them as it is very unusual, while others have strongly condemned it. In addition to agreeing/disagreeing that this cannot be called cheating, they believe that such rules should be more clear.

Since we can’t call this cheating because the rules are clearly defined, we have come to the conclusion that every punter should read the rules carefully before starting the game.

What do you think?

“Returning Card in Jacks or Better Opens a Debate on Cheating’’, lcb.org, December 3, 2021.