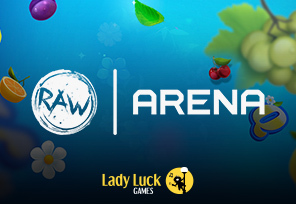 Lady Luck Games, a well-established gaming developer, announces a new collaboration with RAW Arena, which will help the developer further expand its global in the industry.

This popular casino software supplier of engaging and innovative content, this year presented its portfolio in several important regions, further improving its position among leading brands.

Lady Luck joined forces with CYG Pte Ltd not so long ago and brought an array of its impressive online casino releases to Asia.

This fantastic agreement preceded the new, major move that will mark 2022.

The developer announced it has teamed up with another fast-growing platform provider to launch its library of titles across several jurisdictions and move closer to its goal of global expansion.

As part of the contract, the developer will bring plenty of engaging and feature-packed online casino releases to its partner’s platform, which will be available to clients in multiple global markets.

RAW Arena can boast of an expanded offering that now features multiple Lady Luck Games’ hit titles such as The Treasures of Tizoc, Mr. Alchemister, Valholl: Wild Hammers, Beetle Bailey, and Astro Anna! Furthermore, it is a well-established B2B brand that has expanded its presence to several fast-growing markets including Sweden, Denmark, the United Kingdom, Germany, and the Netherlands.

Mads Jørgensen, Co-Founder and Chief Executive Officer of LL Lucky Games AB said: “This agreement is significant for Lady Luck Games, as it’s an important first step for our STORM RGS platform that will allow us to integrate our gaming content faster on the global market. We’re very excited to see what the future will bring as a result of this landmark partnership. Access to top-tier operators via the Raw Arena aggregation platform is very exciting. The migration of our tech platform the STORM RGS is live and ready, and I see a substantial opportunity for increased revenue from this partnership.”

Steven Matsell, Chief Commercial Officer, of RAW Arena said: “We are thrilled to partner with Lady Luck Games. Integrating with the StormRGS from Lady Luck Games gives our partners access to their fantastic graphics, innovative mechanics, and exciting features that really stand out.”