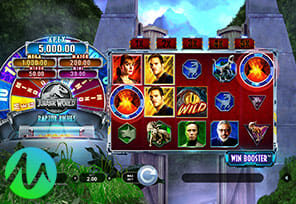 Microgaming, an award-winning developer of casino content, has joined forces with Fortune Factory Studios to introduce the next sequel of its Jurassic World slot experience. The new game is called Jurassic World: Raptor Riches and players are invited to join the mission and visit the dinosaurs.

At the start of the game, users will join Owen Grady and Claire Dearing as they travel to the island of Isla Nublar to save the raptor, ‘Blue’, and keep the last resurrected dinosaurs of Fallen Kingdom.

The slot is full of different features which lead to massive prizes. For example, you will see Walking Wild Respins which are triggered when the stacked Indoraptor wild element appears in any position on the reels. The Indoraptor will Nudge to fill the reel and move across the reels, delivering up to five casino respins with enhancing multiplier.

Players who collect ancient amber fossils will have a chance to activate the Jackpot Wheel feature. When spinning the wheel, players can also receive one of five instant cash prizes up to 2,500x the wager with the Apex jackpot! If you are lucky to hit three bonus scatters, you will get a spin at the Casino Spins Wheel for up to 20 bonus spins. The island volcano will erupt, the multiplier trail enhances and the lndoraptor wild element boosts the reels to deliver respins more frequently during the mode.

There is also a chance to activate the Win Booster

and raise the stakes, enhancing the respin multiplier trail in the base game up to 10x. If you trigger casino spins with the Win Booster

triggered, the winning potential will soar with up to a 20x multiplier!

What Was Stated on the New Release?

Speaking on the newest addition to the portfolio, Director of Games at Microgaming, Andrew Booth says that he is very excited for the company to be returning to Isla Nublar in Jurassic World: Raptor Riches, proceeding to build on its existing prehistoric offering from the franchise. With the inclusion of the Win Booster

mechanic and Apex jackpot, customers are sure to enjoy their time visiting the dinosaurs in the thrilling Jurassic title. Market Readiness and Logistics Lead at Fortune Factory Studios, Michael Coletti said:

“We’ve really enjoyed exploring Jurassic World and bringing back everyone’s favorite prehistoric predators, especially the Indoraptor in the Walking Wild Respins and watching him stalk wins as he moves across the reels. We can’t wait for players to experience the thrill and roaring win potential of Jurassic World: Raptor Riches”