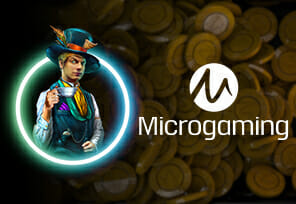 Microgaming, one of the most recognizable providers of iGaming content, has revealed a host of exclusive studio and content partner game releases for September, including a magical Mega Moolah progressive slot.

The renowned supplier is kicking things off with the release of Cossacks: The Wild Hunt by Foxium. The game features three riding Cossack heroes and up to 46,656 ways to win with free spins, cascading reels and WonderWays. The title is also equipped with a Release the Wilds feature, which is triggered randomly in the base game. To Arms features releases arrows on the reels and the symbols change to create six-of-a-kind wins.

The second title, which will be released on September 9, is called God of Fire, developed by Northern Lights Gaming. The title features the Ultraways mechanic and has 60 million ways to win and the win potential is over 18,000x. The title also includes unlimited free spins with lives where the God can award a multiplier.

Mega Moolah The Witch’s Moon will be released on September 30 and it is developed by Aurum Signature Studios. This progressive jackpot slot features free spins, multipliers, and the chance to win Mini, Minor, Major and Mega progressive jackpots when the Mega Moolah jackpot bonus wheel is triggered.

On September 14, Just For The Win will give us Big Boom Riches, featuring Rolling Reels, free spins, cash prizes and a wide range of charming characters and features.

Alice in WildLand, developed by SpinPlay Games, will be released on September 28, with 40 paylines, Copycat Wilds, Cheshire Multipliers, and free spins over two sets of reels.

Queen of Alexandria has already been released (September 2) and has been developed by Neon Valley Studios and players can experience ancient Egypt, filled with wilds and the golden Pot Collect mechanic.

Ascension: Rise to Riches will be released on September 20. This title will feature EpicStrike mechanic for amazing wins. Also, Gong Gaming Technologies will release Lucky O’Mega on September 13.

Microgaming is one of the pioneers in the iGaming industry. The company developed the world’s first online casino back in 1994 and the first mobile casino software in 2004. The company has headquarters on the Isle of Man, which opened in 2017. The teams at Microgaming genuinely care about iGaming, its operators, and players. Its products include casino, poker, bingo, sportsbook, land-based, and live dealer games.

“Microgaming lights up September with a host of rich new content”, microgaming.co.uk, September 6, 2021.