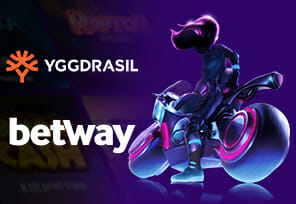 Yggdrasil, the famous worldwide publisher of online gaming content, has signed a partnership with global online operator, Betway. The partnership sees the supplier significantly expanding the reach of its top-performing iGaming offering.

Thanks to the partnership, the developer’s content will be made available to several players across several regulated markets, including the United Kingdom and Germany. Included in the partnership are third-party games via the YG Masters program.

Representatives from Yggdrasil, which recently debuted Redcap Inn, say that Betway is a hugely recognizable brand and that they are delighted about partnering with them across numerous regulated markets. They also said that this is an exciting period of expansion for the company.

Andrew Pegler, Director of Commercial Operations at Yggdrasil, said: “Betway is a hugely recognisable brand and we’re delighted to partner with them across numerous regulated markets. Our engaging slots offer players a highly immersive gaming experience and we are confident our best-in-class games will resonate well with Betway’s customers. We are in an exciting period of expanding our footprint with top tier global and local operators, and at the same time cementing our business strategy to work very closely with our partners growth ambitions in their key regulated markets.”

Paul Adkins, Marketing and Operations Director at Betway, said: “Yggdrasil’s products have long stood out in the market for their impressive and engaging designs, and we’re delighted to be able to offer them to our customers. With a comprehensive roadmap of exciting games, features and tools, we’re extremely excited about this partnership and look forward to a close working relationship together.”

More on the Maltese Brand

Yggdrasil was founded in 2013 and during its years in the iGaming industry became one of the leading providers of superior online gaming solutions for iGaming operators. The brand operates within the regulated remote gambling industry and is fully committed to fulfilling the licensing requirements of the licensing jurisdictions. It holds licenses from the United Kingdom Gambling Commission, Malta Gaming Authority and the Romanian regulator (ONJN). It received its first license back in 2013 and in 2015 the company reached a milestone by releasing its in-game promotional tool Boost

The success of the company was recognized many times. It managed to win Innovation in RNG Casino Supplier Award at the EGR Awards in 2019 and 2018, Innovator of the Year award at the International Gaming Awards in 2018, and again in 2019.