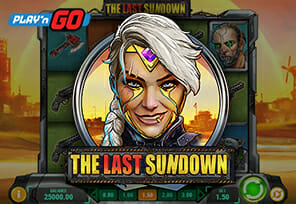 Let’s find out how the famous Play’n GO provider imagines the future in the new online slot – The Last Sundown.

If you decide to try this title, you will be greeted by 4 warriors Tuco, Lauro, Rae, and Devin. They will explain to us during the game what will happen in the future.

The grid is located on the outskirts of a sandy deserted town. It consists of 5 reels and several rows, most often three. However, since some symbols will be divided during the game, the number of rows will change, as well as the number of ways to win from 243 to 59,049.

In this high-volatility slot, lucky punters are given the opportunity to win up to x36000 the bet! Impressive isn’t it?

The theoretical Return to Player is 96.20% which is slightly above average. The low-paying symbols we will encounter in this title include a rifle, pistol, ax, knife, and bomb. In addition to low-paying symbols, the grid will be adorned with high-paying ones that are a dog, Tuco, Lauro, Rae, and Devin.

During the base game, a random symbol can be split, and this rule applies to all symbols except the scatter.

The Wild symbol will replace all symbols except the medical kit during the game.

A Few Words from Head of Games

Head of Games Charlotte Miliziano said: “The inspiration for this game is from the ever-present problems that climate change presents and how society would have to deal with extreme weather conditions. The contrast of the scorching daytime heat to the freezing nights. This is our first game that focuses on a dystopian world; we wanted to create a game with really gritty characters that players could get excited about. We see Rae and Devin as the end of the world’s answer to Robin Hood.”

During November, Play’n GO expands its portfolio in addition to this title with the hit The Legend of the Ice Dragon.

All of this was preceded by incredible titles during October of the same year such as Tales of Asgard: Loki’s Fortune, Snakebite, Sparky & Shortz, and Muerto en Mictlán.

The post Play’n GO Shows You What the End of the World Looks Like in Latest Slot The Last Sundown first appeared on RealMoneyAction.com.