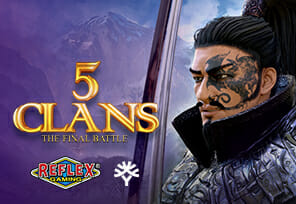 Yggdrasil, one of the leading casino software developers, with its good partner Reflex Gaming, has launched a new online slot – 5 Clans: The Final Battle.

The battle will take place between volcanoes and mountains whose tops are covered with snow where the grid is located. It is composed of 5 reels and 3 rows which is a very common occurrence and contains 10 paylines.

The Wild symbol will replace all except the Bonus symbol during the game.

The Bonus symbols are in the form of shields of different colors.

Nine free spins can be rewarded if The Gold Shield, which is a bonus symbol, lands on reel number 5. The Red Shield can change the reel into a Super Wild and award one free spin. The Blue Shield can offer you up to 50x your stake, The Green Shield will change all the symbols into Wilds during the game and thus provide you with even more free spins. Last but not least, the Purple Shield symbol will reward you with free spins if you land on reel number 1.

gives fans an immersive and feature-filled slot in which they join the battle of five opposing clans in their quest of securing huge wins. With high-level alluring graphics, combined with the animation of clan leaders, we can’t wait to see how our fans react to the game really coming alive.”

More About the Brand

This slot was preceded by recently launched hit titles from Yggdrasil including Lady Merlin, Serendipity, Glory of Heroes, and others.

The provider announced that it will introduce its users to several more titles this month. In addition to launching slots in November, it expanded its business network to North America thanks to a partnership with IGT.