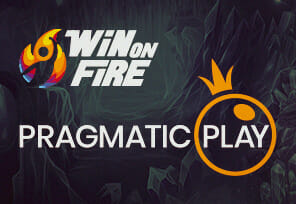 After gaining LOTBA accreditation and expanding to Buenos Aires, Pragmatic Play continued its struggle to expand and strengthen its presence in as many key markets as possible.

Namely, developer strengthened its position in the LatAm region with a new partnership with the well-known brand Winonfire. By agreement, users who decide to try out the services of this operator will be able to access Pragmatic Play’s products such as live casino games, virtual sports, and online slots.

What Products Are Included in This Deal?

The offer will also include very popular online slots that punters have fallen in love with within a very short time, such as Crystal Caverns Megaways well as well as the iconic series of online titles John Hunter.

In the Live Casino offering, players will have the opportunity to meet the classics Baccarat and Roulette, but also the iconic show-inspired Mega Wheel product.

Virtual Sports, on the other hand, will offer highly sought-after football, but also horse racing and greyhound recreation.

Pragmatic Play is constantly strengthening its position in this region and is gaining the trust of a growing number of punters, as evidenced by partnerships with MarjoSports, Playbonds and Dotworkers.

Victor Arias, VP of Latin American Operations at Pragmatic Play, said: “Having our content live with Winonfire is yet another coup for us in Latin America. Ensuring that our portfolio continues to be available through the leading outlets there is a key part of our ambitions. ”

More About Pragmatic Play And Its Recent Work

As we have already mentioned, Pragmatic Play recently stepped into Buenos Aires. However, this provider also expanded to Brazil by collaborating with LuckySports, but later strengthened its position by partnering with other Brazilian operators such as MarjoSports, Milbets, Bingotine and many others.

This developer has been awarded several times this year for its hard work, as evidenced by prizes at the prestigious competitions SBC Awards Competition and EGR Operator Awards, where he won the award thanks to the popular game Gates of Olympus.

A very interesting product that has recently become available to players is modeled on Pragmatic’s online slot Sweet Bonanza. This online release has been turned into a live casino game that will be broadcast from the provider’s modern studio made just for this occasion – Sweet Bonanza Candyland.

The post Pragmatic Play Distributes Its Wide Portfolio in the LatAm Region Thanks to a Partnership With Winonfire. first appeared on RealMoneyAction.com.