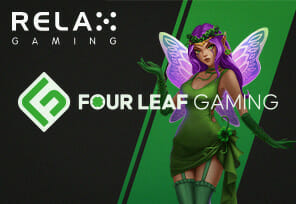 Four Leaf Gaming was founded in 2021, but don’t be surprised when we tell you that this company has already devised its business plan for next year! It was created as a realization of the idea that the founders John Quinn and Andy Hollis had. John and Andy boast over 20 years of experience in the iGaming industry regarding games and product development.

According to the agreement, Four Leaf will have access to RG’s first-tier operators, aiding them in attracting a wider audience. All aspects of the deal should be in motion come March of 2022.

RG will also benefit greatly from this partnership by offering even more online games to a wide range of users.

John Quinn, Co-Founder at Four Leaf Gaming, said: “The decision to join forces with Relax as a Silver Bullet partner was a straightforward one. The combination of their technical excellence and winning mindset matched our own, and together we have the formula to achieve great things. It’s fantastic to share our vision for building games that reward, engage, and deliver end-to-end excitement to the player. It’s an understatement to say we are excited to debut our first game on the Relax platform.”

More to Tell & More to Come

Relax Gaming, which also recently joined forces with Spinmatic, is constantly striving to maintain the trust of its users by giving them the opportunity to try some of its best online titles, along with third-party online slots that this provider offers thanks to its affiliate programs.

RG can also boast of winning a prize despite strong competition. At UK’s prestigious International Gaming Awards in September, it took home the Unique Gaming Company of the Year award.

All in all, this was a successful year for both companies, but it seems to us that 2022 will be even better!