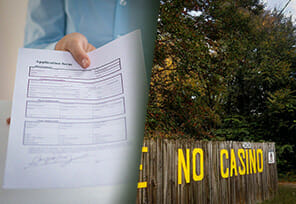 After the city voters dispelled plans for the One Casino and Resort in Richmond, the latest survey has just unveiled that voters may change their mind about the opening of the casino if it moved to Petersburg.

Reacting to these claims, Richmond City Councilwoman Reva Trammell informs people that she is gathering signatures for a petition pledging the city to organize another referendum for the introduction of a $565 million casino resort.

The petition and survey are circulating by phone and text messages, leading political observers and casino rivals to talk about whether the project’s backers are evaluating how they can influence the public and win the vote in Richmond.

The One Casino campaign predicts $500 million in tax revenue in the next decade and 1,500 jobs. Supporters accentuate that it would be the only Black-owned casino in the US and a big opportunity for the economic development of the region where Black and Hispanic communities reside.

Based on the results, about 49% to 51% of votes are divided in terms of racial and geographic lines.

“Clearly they think that with slightly different messaging, they would have the opportunity to win if it came again,” They’re exploring whether they would have a better chance of it passing if they redo the messaging with a stronger focus on challenges to the city’s budget.”

More Details About the Current Program

It is still not clear who has is spreading the survey. It doesn’t have any title and does not give any additional info after completion. According to an Urban One statement, the national media conglomerate standing behind the idea for Richmond casino they don’t deny the connection in the survey.

As part of the survey, respondents are also asked to say how they voted on the casino question, do they remember the project location, do they live close to live to the location and whether they heard or saw any pro- or anti-casino program before the election.

It also consists of questions asking if people would back a casino in Petersburg and whether they would prefer a Richmond casino in case of more direct funding for housing, tax relief, and public education,

A referendum for the Petersburg casino would lead to changes to the current state casino bill. As per the law, only Richmond, Danville, Portsmouth, Norfolk, and Bristol are permitted to obtain casino licenses, after the approval of local voters.

“Another Richmond casino referendum? A survey and petition are circulating to do just that.”, richmond.com, December 3, 2021.

The post Richmond Ready for Another Casino Referendum Based on Survey first appeared on RealMoneyAction.com.